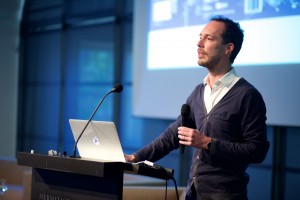 In his Design & The City presentation Joost Beunderman argues that new forms of citizen entrepeneurship are generating social outcomes that the private sector has found hard to achieve. Citizens organize their own energy, ways of learning, libraries and more.

Citizen entrepeneurship goes beyond the participation society and has the potential of a genuinely different economy. We move from a corporate economy by the few, to a civic economy by the many. Beunderman talks about various examples of this shift, such as the Open Works project, Incredible Edible Todmorden and the Impact Hub in Birmingham.

He also poses an important question, because what is challenging is bringing together a coalition to fund these platforms – because the outcomes of these initiatives are often not clear from the start. Crowdfunding is a possibility for project initiators to generate funding and be accountable to a community, and not just funders.

Read the essay by Joost Beunderman: Investing in a Flourishing 21 Century Urban Commons.