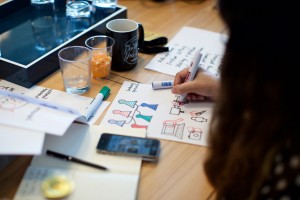 Straight after finishing their Lab of Labs design charrettes, the teams lead by Waag Society, Ideal Lab, Fields of View, Kitchen Budapest and Design Informatics (University of Edinburgh) presented their results and first reflections on the past two days. With their minds still racing from the sessions, they got up on stage in the Kohnstammzaal of the Amsterdam University of Applied Sciences.

The Lab of Labs were two-day design charrettes lead by international labs during Design & The City, that explored a variety of approaches for living labs and design research practices. The sessions took place on the Knowledge Mile, the area in heart of Amsterdam that runs from the Nieuwmarkt square to the Amstelstation, which was also the subject of the Lab of Labs. On 19 April 2016 – the evening of the second day – the teams presented their first outcomes to the public. Conference programme coordinator Martijn de Waal mentioned in his introduction on the public presentations that the Lab of Labs is about exploring design methods for living labs. In turn, living labs are an approach to give citizens and other stakeholders a more active role in the act of citymaking.

Research into methods is also a key part of the research at Design & The City organizer Amsterdam University of Applied Sciences (AUAS). MediaLAB Amsterdam, part of the AUAS, for example developed a Design Method Toolkit. The Lab of Labs brings in information on methodologies from all around the world, that focus on designing for citizens. Lab of Labs coordinator Gabriele Ferri adds that to be able to research design methods, you need to see the designers in action. The Lab of Labs allowed participants to experience the design processes of the international labs in person.

Waag Society
The workshop at Waag Society took the Nieuwmarkt square as the focus for their design charrette. The question Waag posed was to think about what the Nieuwmarkt meant to all local stakeholders involved.

The first part of the design process consisted of defining design values. After that, each of the three groups was asked to create a fictional persona and describe a day in the life of that persona. The groups were then presented with a puzzle, meant to take the persona on a trip to get a more fulfilling experience out of the square. The puzzle helped the team take a step back from all the biases they had. In between all of these actions, the groups presented their progress to the other two groups. This way, they got feedback on every move they made –it translated back into the original story, allowing it to evolve. On the second day the team made prototypes based on the persona. One of the two teams came up with the concept of unlocking all the potential assets in the square that are privately held, for example toilets in restaurants, or battery chargers for mobile phones. This network would take the form of a physical box where a visitor of the square could see what assets he or she could use in the square. The resulted in some questions, for example: How would this be powered, through a solar panel perhaps? How would a community be able to maintain this network? How do we keep people connected to this?

What makes this method of working typical for Waag Society is that the end user is very important. The idea is to take technology to a personal level. In the process, groups for example went into the square to question passers-by. Also, the digital revolution has opened up public space. This exchange between public and digital space is also important part in the design and research done at Waag Society.

Ideal Lab
The subject of the Ideal Lab design charrette was the Knowledge Mile, the area that runs from the Amstelplein tot the Nieuwmarkt. After their initial research, one the problems the team found was the gentrification of the neighborhood, where people with money take over the neighborhood. The existing inhabitants feel they are squeezed out of the neighborhood. The team agreed that the Knowledge Mile has to commit itself to this problem in a couple of ways. The first scenario proposed a moveable Knowledge Mile bazar, where people can eat and meet. The form could for example be a boat that travels around the canal – also to bring the knowledge that is in the institutes to the streets. All sorts of events could be organized, involving storytelling, philosophy, theatre, music and cooking.

For the second scenario, the team created a tool that allows people to draw lines, but you can only see them when you wear a specific type of glasses. For example, a family living in a neighborhood could draw a line around the space where their children play. If their neighbors do the same, there is an overlap. There is a shared space. This tool can make people more active in planning their own neighborhood. It could be used as a tool for city planners, or as a research tool for universities.

Fields of View
The Fields of View team started the design charrette with a twenty-minute walk around the Amsterdam University of Applied Sciences to come up with ideas for the neighborhood. Back in the room the first thing they did was define a problem in the area. What surprised the team was that none the people in the neighborhood were familiar with the idea of the Knowledge Mile. This became their theme.

The team then mapped the stakeholders, using post-it notes all around the room. They defined them using a matrix of collective / individual and formal / informal. The group went back to working in two groups to map the relationships between the stakeholders, they drew lines between them and defined them in terms of – amongst others – money, power and services. The result of the design charrette was a game around the winning scenarios for the key stakeholders. How can they be successful? The game was envisioned as a learning tool. Looking back on the process, it was learning-oriented and not solutions-oriented. It was completely iterative, as certain times the team went back to their original question and redefined it by reframing, self-reflecting and looping. What interested the participants was that the discussions outside of the context of this design process would have probably lead to fierce arguments, but within the context of the Lab of Labs session it was easier to go beyond preconceived ideas and models and move to a new level of understanding.

Kitchen Budapest
Like the Ideal Lab team, the Kitchen Budapest team also defined gentrification as one of the issues in the Knowledge Mile area. The team used an adaptive design method: defining the process as they went along.

The team agreed to focus on the relation between tourists and locals. Everyone agreed, because part of the design process was that everyone had to agree before moving forward. The problem according to the team is twofold. On the one hand the locals feel they are pushed out of their neighborhoods by the increase in tourists. On the other, tourists are treated as financial commodities – they don’t participate or invest in the local. How can tourists then become more active participants in the city? Firstly through in-kind exchanges, secondly by expanding the geographic range of the tourist and thirdly by providing authentic (local) experiences to them. After creating personas and doing online research, the team came up with two ideas for prototypes: The Surprise Machine: use surprises to connect tourists with locals; and Tinder for Tourists: connect tourists with people with similar interests. The team moved forward with The Surprise Machine idea and came up with the following scenario: a visitor arrives in the city, gets of the train, goes to a surprise machine, buys a tickets, goes to a location, local offers him a surprise, local gets some money, some goes into marketing the platform, and some goes to the local.

The two days lead by Kitchen Budapest were typified by the lack of a methodology, but an emphasis on the process itself – which was really important. Participants had to get really close to the user: when someone starts drinking a beer, the designer also drinks beer. It is about getting as close to the customer as possible. Design is a human-centered thing. The first is Civic Blocks, which uses the blockchain for allowing citizens to vote on the future development of the city. In such a protocol, there is no longer a central node. The network is decentralized. As a result citizens in Amsterdam in 2025 will be able to spend 10% of the city’s budget by way of this ‘participatory budgeting’. This way, the citizens shape the city together.

The second concept is Handfastr, which allows users to create temporary economic zones in which they can share their budget: it is a way of shared banking and spending. People teaming up can generate more economic interest by staying together – allowing them for example to get better deals with restaurants on their visit to Amsterdam. The contracts can be set to one month or even up to a year.

First reflections
In their recap of the evening Martijn de Waal and Gabrielle Ferri emphasized that what we have seen this evening is only the tip of the iceberg. What interested both was how the teams got the voice of the citizen into the design debate – and how different these methods were. For example, Waag Society used personas, but Ideal Lab only wanted to work with real people. Design Informatics didn’t do interviews, but used an incomplete product as a starting point, which was intended to provoke people to see how they would react. Fields of View used actor mapping, a more formal approach using four quadrants.

The results of the Lab of Labs design charrettes will be used in the work by researchers at the AUAS. They have joined the teams in the past two days and they will share their findings later. 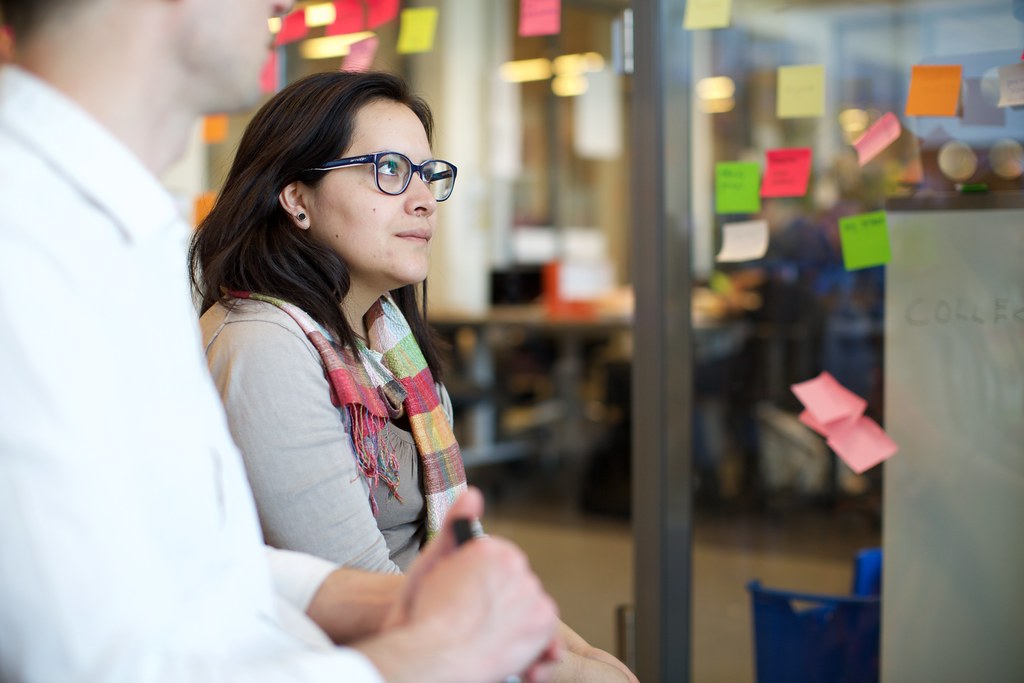